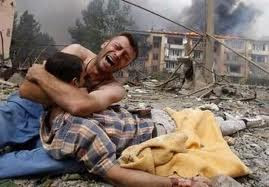 The Georgian-Russian war started on 08/08/2008, and on 12/08/2008 Georgia filed an application against Russia before the International Court of Justice (ICJ), accusing Russian armed forces of ethnic cleaning under the International Convention on Elimination of All Forms of Racial Discrimination. An interesting question is whether this application was prepared before the start of the war or in 3 working days after its start.

The ICJ dismissed the action on 01/04/2011 due to the fact that Georgia did not try to negotiate with Russia before suing its Government (§ 141).

Georgians argued that Article 22 of the Convention providing a possibility of seising the ICJ in respect of “any dispute <…> which is not settled by negotiation” is merely a statement of fact (§ 128), but the ICJ replied that a dispute which is settled is not a dispute anymore (§ 134). Therefore, this phrase must mean that Georgia had to try to negotiate with Moscow. The future perfect tense of the French version even more suggests the need to try negociating: “tout différend … qui n’aura pas été réglé par voie de négociation” (§ 135). The ICJ also added that this is the precondition for an application under a number of other international treaties as confirmed by case law (§§ 131, 137, 138).

No exception for the state of war.

It is strange that Georgia adopted the legal strategy of a direct action, did not take insurance, and did not preview the scenario that has happened. The Saakashvili Government hired 14 lawyers for this case and Russians had 23.
Posted by Stanislovas at 10:52